Tanna is that place.  That place you hear about and can't hardly believe it still exists.  John Frum villages sitting besides an exploding volcano.  Sharks, surf, gnar kava, and traditional living.
My folks have just arrived to sail with me for 3 weeks.  Tanna is where I take them.

We sail one day and night to reach Black Sands anchorage on the Northwest coast of Tanna.  We go ashore and meet an old local dude who points us in the right direction of the nearest village in order to meet the chief, and make sure we're welcome to anchor.  His name is Fo'an and the name of the village is Laocosamusam.

Before arriving, I had heard about the kava drinking tradition of Tanna.  The young men chew the kava root till it's mush, spit it out to be mixed with water, then it is drank by the rest.  What?!  Apparently, the saliva helps to extract some of the more potent aspects of the root, so the kava is very strong.  Sharing kava is one of the best ways to be introduced into the village and to experience local life, and I felt that in Tanna, because of this challenging way it's prepared, taking part might get me some extra street cred.  I was prepared to ingest another dudes saliva to feel welcome.

I had told my dad that sharing kava was an important part of experiencing Vanuatu life, but I think I had forgotten to mention that one interesting aspect of how they do it in Tanna.  Once we had met the chief and everything was gravy, he invited us for kava that afternoon.  We were to return at 3 p.m.

We sat with all the dudes of the village, communicating in Bislama (pigeon language) and English, and watching as all the guys under 30 years of age chew the kava root.  As the guys are chewing it and spitting it out onto leaves to await mixing, I think my dad is beginning to get the idea of what is about to happen.  We sit for about 2 hours before all the kava is chewed up and ready to be mixed.  Each serving is on a single leaf.  A stick is driven into the ground which is used to hold one end of a length of coconut bud sheath (the mat like material found in the coconut tree), which the kava is plopped into and mixed with water.  The other end of the bud sheath is held and twisted by hand, squeezing out our drink below into a coconut shell.  We each receive a half coconut shell filled to the brim with this muddy looking water, trying to forget the image still in our minds of these guys spitting out the chewed kava who made sure to hawk up the last bits in the back of their throats and add it to the mix.

Prompted to drink, we send it down the hatch.  I have had kava before, and even in larger volumes, so I knew what to expect of the taste and effect.  This one tasted pretty much the same, but its effect was quickly setting in and getting stronger.  It gets to the point I can't really see or move my body.  I sit there, existing deep inside my head.  I suppose I was coherent inside there, but my body was gone.  I gradually gained a bit more of my senses, and laughably shared my experience with the guys as they drank theirs.  We leave them before sunset, thanking them for the warm welcome, and make our way back to the boat.

I returned the next night for one and a half shells of kava... 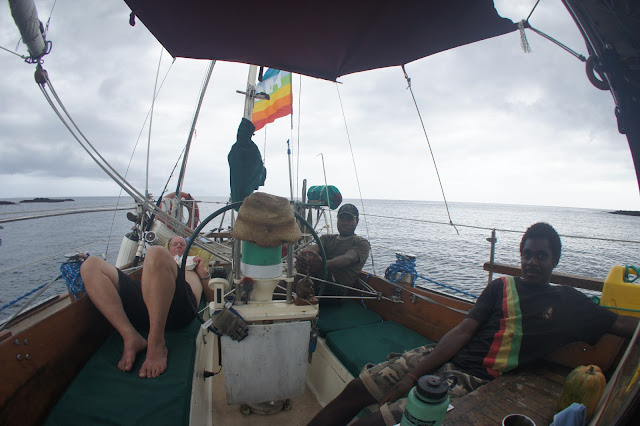 Hanging out on the boat in Black Sands.  Tamaka, on the right is the chief's son, my dad is on the left, and the dude in the back right is Tamaka's cousin.  I am not sure which one of these dudes chewed my kava... 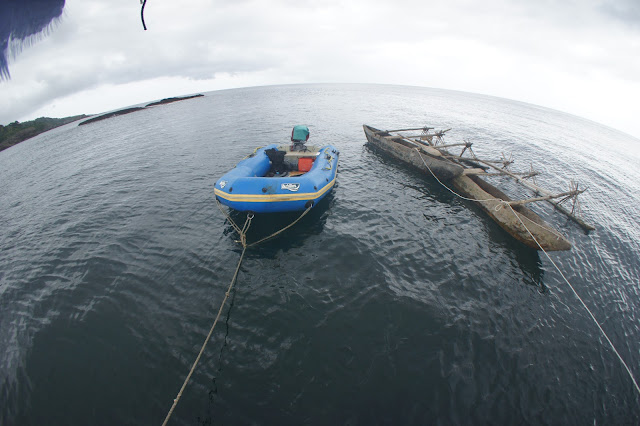 While we were chilling, we noticed some fins in the water a couple hundred feet off our stern.  It looked like a few small sharks feeding, so I borrowed one of these canoes and paddled out towards it.  As I got closer the fins went below the surface, and I could just see a ripple in the water coming right towards me.  Whatever it was, went out of site below me, then reappeared behind me.  I turned around and chased after it.  As I got closer I realized what it was...  a manta ray!  Just cruising around, doing its thing.  I got a bit too close, and it flipped its wing splashing water on me :)

A bit later, we were taking the dinghy up the coast to check out some sea caves, and the manta was still cruising around so I grabbed my mask and jumped in the water with it.  So amazing to swim with this beautiful creature...  Awesome.

As I was swimming back to the drifting dinghy, I see a lovely sea snake cruising about 50 ft below me... 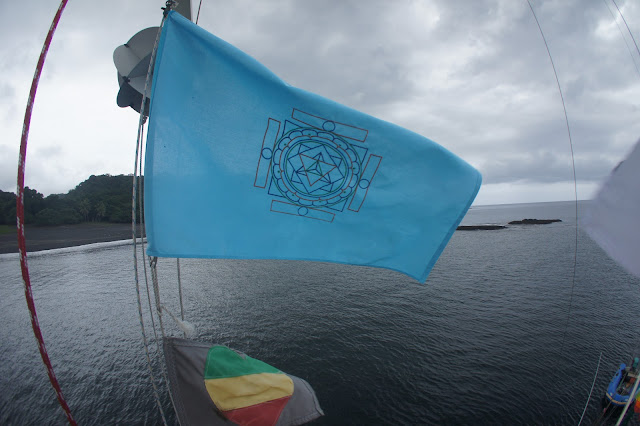 Posted by Captain Jacob Ells at 11:00 AM